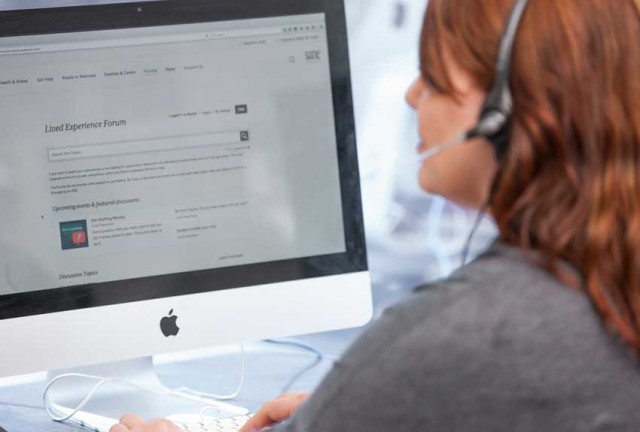 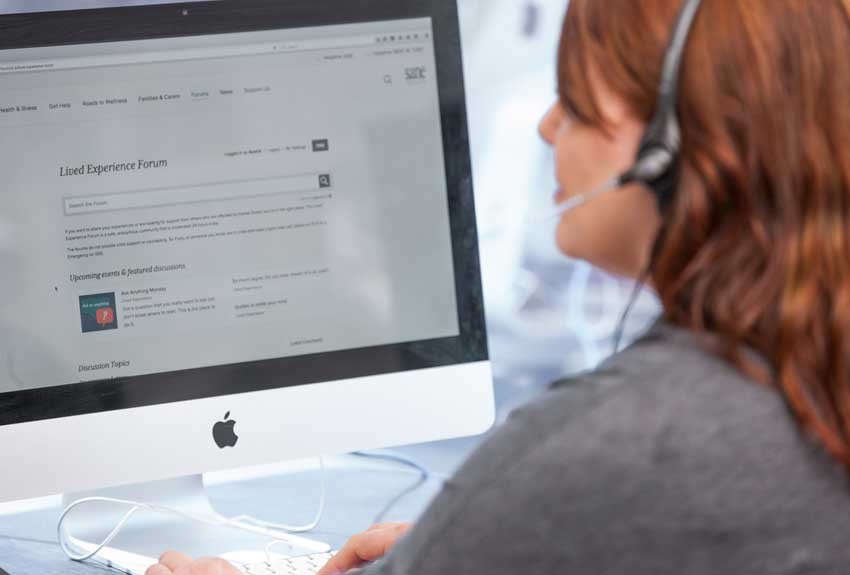 The staff who answer the phones at mental health hotlines are at the coalface of the industry, working directly to help people in crisis.

SANE followed a typical day in our Help Centre, which offers 12,000 hours of free specialist support every year for people affected by complex mental illness.

9.30am – Team members arrive to begin their shifts. Suzanne, a psychologist who formerly worked with Queensland Police, is the manager of the Help Centre. She is warm, funny and supports her staff through what can be a stressful role. While the job involves helping people through some of the worst times of their lives, the Help Centre is often filled with laughter and jokes.

The people who answer these calls require a special blend of compassion and toughness. They don't know what will be waiting at the other end of the phone line: a teenager threatening suicide, a mother with a new schizophrenia diagnosis, an elderly man worried about his wife's low mood.

10am – The phone starts ringing and Jane answers. She has worked at SANE for over a decade, and has answered thousands of phone calls from people in crisis. The caller is an older woman who cares for her son, who is in a psychiatric unit. She is worried about her own mental health, and isn't coping. Jane listens calmly, and offers advice and resources. By the end of the conversation, the caller is feeling more optimistic. Jane reassures her that she can call the Help Centre any time.

11am – Jules brings her dog Piper in to work. Piper sits underneath the desks and snoozes, oblivious to the phone calls going on around her. Most phone calls are between 20 and 40 minutes, and can range from people who are feeling helpless and are calling as a last resort, through to carers who are concerned about a loved one.

12.30pm – A young woman calls. She is suicidal and frequently self-harms. Jules reassures the caller and works on a plan for her safety. For some callers, just hearing a caring voice on the other end of the phone is enough to get them back on track.

2.30pm – The team takes a break to celebrate Alex's birthday in the kitchen. Cake from a nearby bakery is split among the team. Working in this environment can forge strong friendships, and having a supportive team is important. The staff all come from different backgrounds and have different perspectives on mental health. Sharing stories and ideas is an important part of their development as counsellors and as a team.

3.30pm – Alex is moderating the forums, while Jane and Jules switch between the phone, web chat and email services. The Help Centre offers support via phone, chat, email and forums. The same counsellors work across all four platforms, which offers consistency and reliability to the people who contact SANE.

5pm – As most people in the city head home for the night, the night shift staff begin arriving. Audrey is a graduate psychology student who has previously worked at a suicide prevention helpline. She is at university during the day, so the night shifts suits her. The phones are quieter at night, but the calls that do come through are usually more urgent, as callers may be in a state of crisis after a difficult day, and many other services are closed after hours.

6pm – A young man rings for a chat about his new diagnosis of borderline personality disorder (BPD). While BPD is not a new disorder, it is widely misunderstood; receiving a diagnosis can be difficult news. Audrey offers support and advice, and sends through SANE's factsheets and guides on BPD.

7.30pm – The city is quietening down, but the online forums and chat services start getting busier. Some people living with mental illness can be isolated and lonely in their offline life, but the forums offer them a way to form friendship and connections.

8pm - The Help Centre is contacted by someone displaying paranoid thinking, who is unsure whether their concerns are real or not. Audrey takes the time to test the caller's thinking, helping them to differentiate between what is real and the influence of their illness. Audrey suspects a deterioration of their symptoms and checks whether the caller is seeking treatment. The answer is 'yes', so she encourages them to book an earlier appointment with their treating professional. The caller sounds calmer when signing off.

9.45pm – Just before closing up for the night, the phone rings again. Alex, who turned 32 today, answers. On her desk, a piece of birthday cake waits, encased in Tupperware, for her to take home to her two young children.

The caller is a teenage girl looking for advice. She is struggling to support her father and her sister, who both have bipolar disorder. She is experiencing anxiety so crippling that she has not left her house for weeks, and is at risk of losing her job. Alex talks to her about carer burnout and the need to look after herself. By the end of the call, the young girl is feeling ready to go into her workplace and talk to her boss about her issues.

10.00pm – The team leave for the night, having provided support and comfort to people living with complex mental illness around Australia. The forums will be busy during the night, as people who cannot sleep seek connection and support. The phones are off until tomorrow morning, when it all begins again.

* Names have been changed

Three tips for managing loneliness this holiday se...
What I have learnt, since learning of me