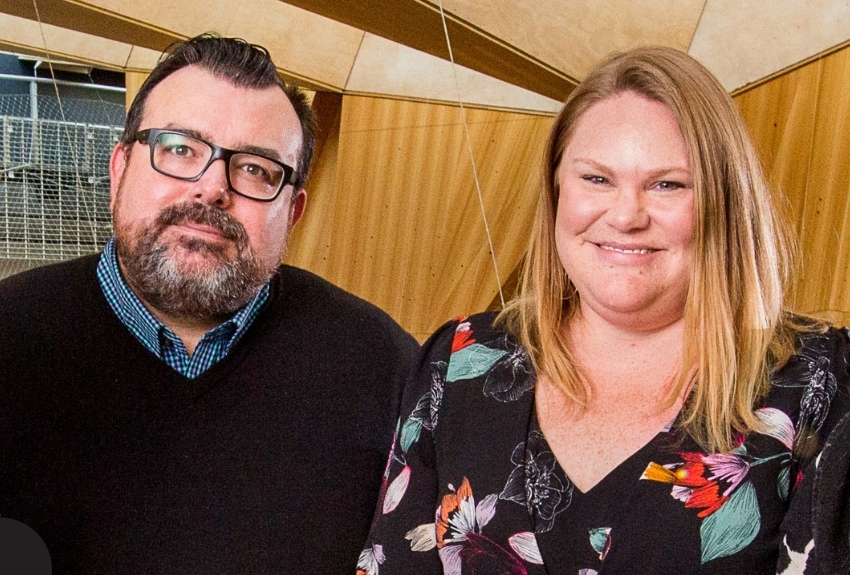 SANE Australia Deputy CEO Dr Michelle Blanchard and Dr Chris Groot, lecturer and director of the Mental Illness Stigma Lab at the School of Psychological Sciences, University of Melbourne
Listen to this page

On 24 February 2019, Victorian Premier Daniel Andrews and Minister for Mental Health Martin Foley released the terms of reference and announced the appointment of the Chair of the Royal Commission into Victoria’s Mental Health System.

The Commission says it “wants to provide the community with a clear and ambitious set of actions that will change Victoria’s mental health system and enable Victorians to experience their best mental health now and into the future”.

In her role as Deputy CEO of SANE Australia and Founding Director of the Anne Deveson Research Centre, Dr Michelle Blanchard gave evidence before the Commission on Wednesday, 3 July, addressing the structural discrimination and stigma people living with complex mental health issues experience in the workplace.

“It’s intolerable to permit or excuse verbal or social exclusion or vilification for those of us who experience mental health issues, but we do.”

SANE is calling for the Royal Commission to focus on providing accessible and appropriate care and support to all Victorians living with complex mental health issues, when they need it.

There are approximately 800,000 Australians living with severe and complex mental health issues and approximately 25% of those live in Victoria.

Many Victorians affected by complex mental health issues – including: schizophrenia, bipolar disorder, personality disorders, eating disorders, PTSD, and severe and enduring mood disorders – have difficulty accessing the support they need, when they need it, due to chronic underinvestment which often delays therapeutic intervention.

In 2017–18, data from the Victorian Department of Health and Human Services showed hospitalisations for adults living with mental health issues increased by 6.7%. During the same period, average hospital stays were reduced, resulting in many people experiencing acute psychiatric crisis being discharged prematurely.

“For mental health care to appropriately support people and do no harm, it must be readily accessible and delivered in a way that is appropriate for the people accessing it. For people affected by complex mental health issues, access blockages can mean that the acuity of their presentation increases before they receive adequate support."

In SANE’s submission, we also addressed the need for services to be integrated to achieve the best outcomes for people affected by complex mental health issues, as well as creating inclusive communities to prevent and assist recovery from mental illness.

“People living with complex mental health issues experience greater levels of disadvantage than the general population, including poor physical health, poverty, unemployment, loneliness and isolation. Our systems should be designed to meet people’s needs, wrapping around them during times of crisis, rather than requiring them to access support via multiple entry points and retelling their story numerous times,” added Dr Blanchard.