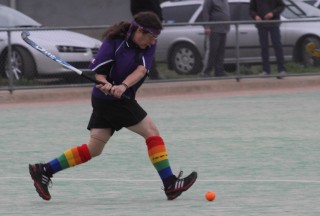 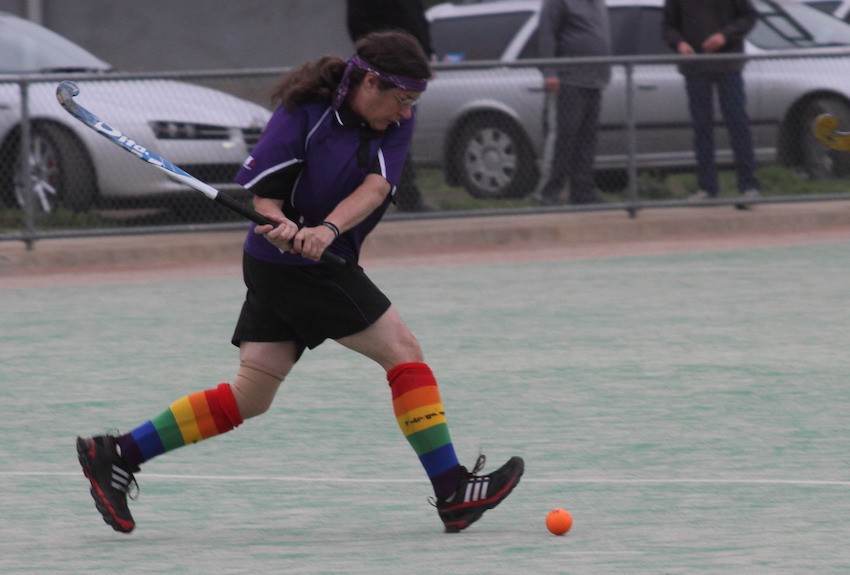 From poet and violinist, to hockey player and advocate, Sandy Jeffs OAM is also one of SANE’s longest serving Peer Ambassadors, sharing her experience of living with schizophrenia for 45 years to shape public policy and help others.

This Schizophrenia Awareness Week, which coincides with SANE’s 35th anniversary, we chat to Sandy about the ‘heady’ early days of SANE, becoming a public figure, and ‘curating’ a life towards wellness, despite the daily challenges.

You’ve been advocating for people with schizophrenia for more than 30 years. What’s changed?

What’s changed around other mental illnesses is that depression and anxiety have become so well known, focussed on and profoundly normalised.

But schizophrenia hasn’t been normalised at all, so there’s still this suspicion and fear because people don’t understand what schizophrenia is like to live with or what it’s about.

When people want to highlight the deficiencies in the mental health system, they focus on people with schizophrenia doing bad things, saying they’re not getting the treatment they need. We’ve become the canary in the goldmine – that’s a change because we never used to be singled out.

The health system has changed – going from asylums into the community was the biggest single change in a generation. But this has had impacts such as more visibility when people are acutely ill in the community, and more pressure on carers and other community services.

We still have a way to go.

What still needs to change?

People need a place to call home for life, with social and medical supports, and a buddy system. They may then have a reason to stay well – if you don’t have a reason, you won’t.

How do we treat people with mental illness? Don’t just pump them full of drugs. Provide other avenues to wellness. Engage people in creative pursuits, work and the community –one which is accepting and not stigmatising.

We need to give people a reason to get out of bed, because getting out of bed is an act of hope.

Has your advocacy focus shifted over the years?

When I was diagnosed it was a death sentence. The clinicians at the time said that with each episode of psychosis I had, I’d go deeper into madness, from which I’d never recover. I bought into the pessimism of my diagnosis and the message. I lived as though my life was over.

My message is more positive now. Forty years ago, I hadn’t achieved anything; my books hadn’t been published, and I hadn’t done anything of significance in my life. Now I have some success and recognition. I have a very rich life.

I’m not a paragon of recovery, but my death sentence diagnosis didn’t eventuate, and I have achieved things I wouldn’t have thought possible.

But looking at the bigger picture for others, I still see a lot of people who are disabled by the illness, who are struggling, whose lives are compomised, and they have to be advocated for. They’ve lost their voice. Not that I can speak for other people, but I can’t assume because I’ve had some level of recovery that others will too. It’s very different for each person.

If we could fast forward another 30 years, what would success look like from your perspective for people living well with schizophrenia?

Forty years ago, they thought they’d find a cure for schizophrenia. In 30 years, I’d like to see schizophrenia eradicated; consigned to the history of psychiatry. But I don’t think that will happen. I’d like to see people living full lives where they are valued by the community, they have jobs, they’re contributing to society, and there is no discrimination.

What are the challenges of living with schizophrenia?

The challenges are living with these symptoms on a daily and nightly basis; the voices are often there when I go to bed. I try to be vigilant with my mental illness, but once you’ve fallen into psychosis you always question your sanity, even when you are well. Losing the capacity to know you’re unwell, where other people can see it, makes you very vulnerable to the illness.

I try to help people understand through storytelling. But I also say to people that I’m not a monster. I try to show people that I’m a face to this terrible label. But this face is not horrible, it’s not monstrous.

It’s a daily challenge to stay sane and maintain a balanced life.

That’s why I have ‘Team Sandy’, which I have to curate to manage my illness. Friends who I live with, the house in which I live, our animals, my orchestras, my hockey teams, my writing and poetry – these all keep me in the world.

What are the positives?

For many people living with schizophrenia, it’s a debilitating illness, as it was for me for many years too. We need to be mindful that a lot of people are suffering, and that for many, finding the ‘positives’ of this illness simply wouldn’t resonate.

Schizophrenia robbed me of so much of my life when I was in my early 20s, and I had just graduated from Uni and was supposed to get a job. That never happened.

However, the thing that has robbed me of so much has also given me a lot. I have a public profile, and my advocacy and talking have given me a life I could never imagine I’d have.

It’s ironic that I have a vibrant life on the back of my madness. It’s given me the books I’ve written, and even getting my gong (an Order of Australia Medal).

If I said to the nurses and doctors at Larundel Psychiatric Hospital in 1978 that I was going to have 10 books published, receive an OAM, be a public person, and have all this success, they would have said, ‘You’re having delusions of grandeur. Here’s more medication. Go and lie down’.

I couldn’t have seen this happening. I was so destroyed by schizophrenia initially. I look at my life now and think, ‘How did this happen?’. And I have to celebrate that.

What advice do you have for other people trying to establish support and community networks?

It’s a hard one. I can only say don’t let the paranoia and illness push people away. Remember that the enemy is not your family and friends; the enemy is the illness. Let friends and family be part of your team.

Based on your experiences of living with schizophrenia over the last 45 years, what would you say to your younger self when you were first diagnosed?

At that time I couldn’t see a future. So, I’d tell my 23-year-old self, ‘Look at your talents and abilities that you might not recognise, and maybe one day they will shine through’. At 23 I thought my life was over, so I’d say, ‘Wow you’ll be surprised!’.

As one of SANE’s longest serving Peer Ambassadors, what was it like working with SANE in those early days?

They were heady days – things got done and there was a lot of hope. Anne Deveson and Margie Leggatt were movers and shakers. They had great networking capabilities and sourced money from all sorts of people, which was extraordinary.

Myself and others were storytellers, and we aimed to ignite compassion and understanding in the community.

SANE continues to have a strong reputation in the sector, and its more recent emphasis on employing people with lived experience is great; it gives us credibility and authenticity.

Why does SANE matter today?

The phone services are critically important for people to have a point of contact when they feel frustrated or left out of the mental health system. People have somewhere to call, with knowledgeable people who can direct them to wherever they need to be.

The Forums are important for younger people online, too.

SANE has come into the 21st century, and this adaptation has been important; it’s why SANE is still relevant today.

Why should people support SANE’s work?

SANE has always been and remains different to other mental health organisations, such as Beyond Blue, and it’s critical that we’re heard. SANE is relevant because we focus on complex mental illnesses including schizophrenia, bipolar, personality disorders and OCD, that people need to understand, and have famously misunderstood, for so long.

SANE is a tireless advocate for better understanding and supporting people and families with complex mental health needs. They champion voices like mine in calling for social and systemic change. With all the reform that’s happening right now, it’s more important than ever for SANE to be rattling those chains.

What would you like people to ‘discover more’ about schizophrenia?

I want people to know schizophrenia is a highly distressing, invasive and disabling illness when it’s out of control, and people suffer terribly because of it. The emotional distress of a psychotic episode is so profound that it destroys your very soul and the core of who you are. The consequence can be catastrophic – it’s not something I would wish upon my worst enemy.

What would you like people to ‘discover more’ about you?

I’d like people to discover more about me as a person – that despite my mental illness, I play hockey, I play the fiddle in the Footscray Gypsy Orchestra, I play viola and violin in my local orchestra, I’m a poet, I’ve written books… I’ve done all these things that any ordinary human being would be really proud of.

I’d like people to discover more about the transformation that is possible if we give people hope, purpose and meaning.

My life changed almost overnight from a nobody with a diagnosis of schizophrenia to being ‘Sandy Jeffs, Poet’ when my first book was published. Being recognised was the beginning of my renaissance. I became someone with a label other than ‘schizophrenia’ – that new label was ‘poet’.

You wouldn’t recognise me then and now.

I’m sharing the story of my transformation with the aim that it might provide hope to someone else, even if it took me years to get out of that psychotic fog.

My sanity is still a fragile thing, and I will always need to keep working on this.

We acknowledge that people have different preferences around how they describe their experiences, and that not having these preferences respected can itself be stigmatising. SANE encourages and facilitates ongoing discussion and debate around the language used to describe experiences of complex mental health issues.

‘Discover More’: the power of choir and community to expand horizons