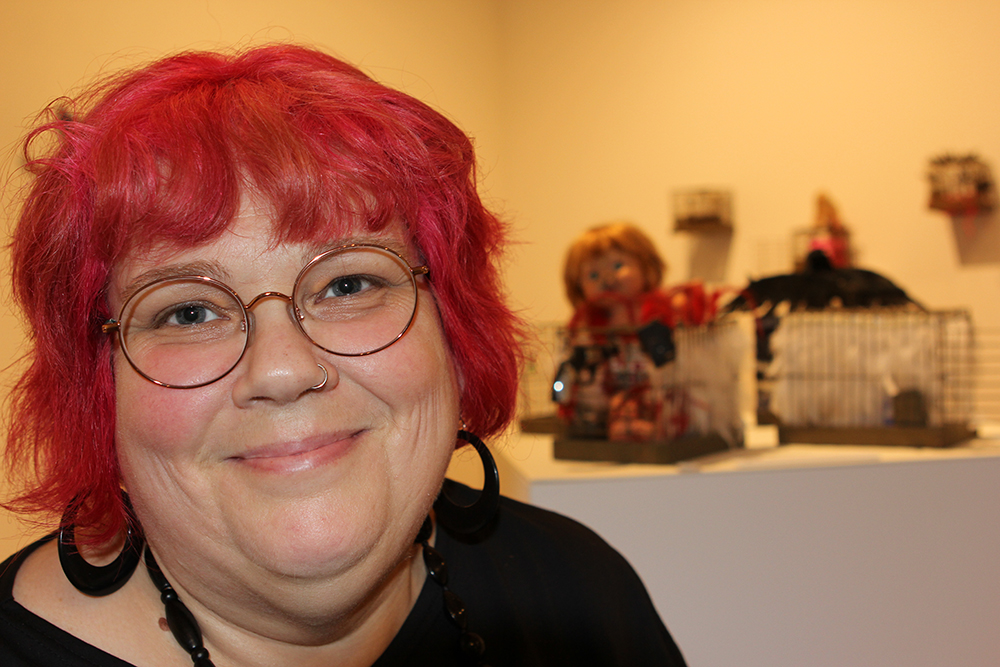 Artist Joanne Morgan gives us an incredible insight into her life, and how it informs her art. You can view Jo's work (along with a range of other talented artists) at The Dax Centre until June 7th.

My name is Jo and I am an artist with a lived experience of cPTSD, schizoaffective, agoraphobia and autism.

There have been several times in my life when due to trauma I have shut down my level of communication and ranged from being dissociative and non verbal to selectively mute and only verbal enough to ensure my safety. It has been during those times of silence that my art has become my salvation.

My quiet solitude has been my vehicle to the discovery of another language. And it has given me time and space and a stillness that has allowed me to sit, sometimes painfully, sometimes peacefully with my thoughts and feelings. It has given me a language that did not live in my head. It lives in my whole. During times of silence it has rumbled inside of me and tossed and turned until it moved through my hands onto a page or a canvas or a sculpture or an installation into a story without words but filled with meaning. It is my safe language that secretly begins its transition from my mind to my hands and into the world with the freedom to develop uninhibited, unrestricted, unmonitored and not threatened in fear of what it might reveal.

In that quiet private space where an image has the freedom to grow unscrutinised and in the safety of my silent language it thrives and matures before my eyes into my truth that wakes me from my deep disconnection into an awareness that sits solidly within me and anchors me to my present and I feel it through the finger tips that conveyed it, through my body that supported those hands and the mind that, free from the constraints of illness allows me to speak my truth.

There have been so many years of detachment and dissociation and psychosis and withdrawn silences that have merged to become a lifetime of unreachable isolation.

Times I've been so unreachable in a state that was missing the very human connection that I craved to reassure me and guide me back to stability and calm.

Times when the distress of the absence of that human connection has driven me further into my madness and unreachability.

This is no place to be.

When you find yourself in this place and you move through it and are lucky enough to resurface into sanity you require a debrief to make sense of it. You need to become clear about what drove you into that place and face what you saw and build a rapport with the language of madness and translate it somehow into a world that other people live in to become connected to humanity again and relate and share your experience.

You also need to leave a trail of breadcrumbs in the snow mapping your steps from an experience of trauma to a shocked response, a withdrawn dissociation, a deep depression, an encroaching psychosis to a complete detachment from reality so that you can find your way back again or recognise your path to madness in the future and hopefully thwart your next episode.

When your experience of trauma results in this level of unreachable isolation through madness or silent dissociated detachment you come away from those experiences with a strong sense of outrage.

You require evidence of how you got there, what drove you, what happened there and how you got out to ensure your safe travels in the event that those drivers find you again. Should you be lucky enough to remove yourself from their path, the evidence you collect can provide you with the justice you crave to right the wrongs and prevent their reoccurance.

I find my evidence in my art. My trail of breadcrumbs is in my art.

Safely tucked away in my language of colour and lines and textures and images lies my truth that cannot be waivered or manipulated or threatened into silence and it whispers to me in my chaos to soothe my mind into an ability to move freely from madness and silence and unreachability into connection and understanding and into the eyes of the outside world where slowly through the process of an image unfolding into a story I can be seen and in that light I can see myself reflected with compassion and humanity. It brings me back into the world that everyone else lives.

My most recent experience of this sort of madness was in 2015.

I was involuntarily hospitalised and chemically restrained for several months. This was by far my most extreme experience of mental illness. The level of psychosis that I suffered had me at times believing there were people living in the walls, that there were armed men trying to kill me, that I was under constant surveillance, and at my worst, that my whole body was on fire, rendering my frantically screaming and flailing while trying to extinguish the flames that I saw and felt all over my body.

I still find it difficult to speak of these times in spoken language and write about them in words. Images are safer. And they are more capable of conveying the absolute accuracy of what happened to me in a way that you can feel it too.

It's a language that i can speak that honestly represents my story and makes me accessible to you and you accessible to me. My psychotic break in 2015 was the result of 45 years of ongoing trauma at it's peak. It's final destination. It was my turning point. It was my chance to face my demons, look them in the eye, name them and put them in their place. 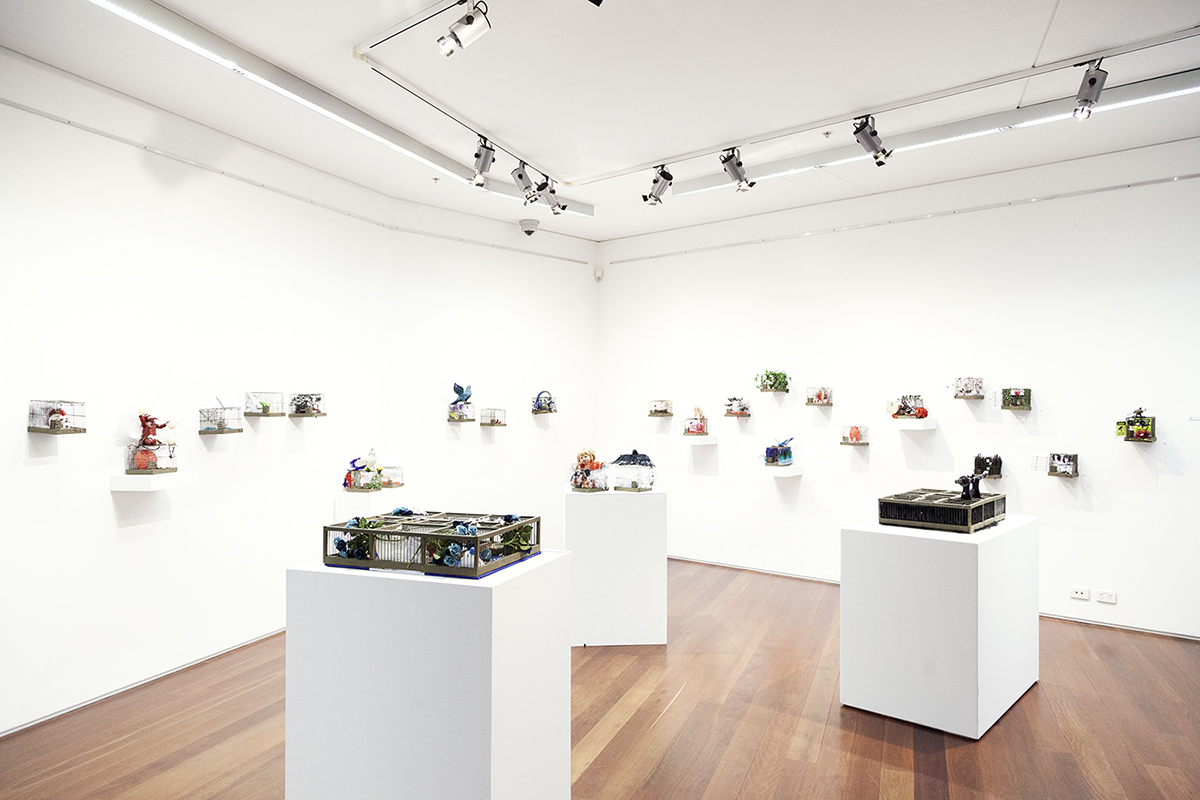 I made the 29 cages to tell this story. Each cage is a representation of a part of me, a trauma, an injustice, an experience. Together they tell my story. My cages were made during my recovery from a psychosis that left me shocked and silenced once again and in a deep and reflective solitude where I needed to safely find my breadcrumbs and make my way home.

My 29 cages project took two and a half years to complete.

When I think of the first year I remember finding the cages for sale on ebay and being compelled to have them. I remember feeling how brutal they looked and that they fittingly represented the confinement I have so often felt in situations of great distress. I kept the cages in the canvas bag they were delivered in for months while I quietly and progressively started to scour the internet for materials and objects and images to create stories in each of them.

Every payday I bought what I could with what money I had left after bill paying.

My mind began to escape into images of great escape as I unfolded the layers of complex traumas in my head into the little wooden and wire boxes. My parcels of materials arrived in my letterbox frequently and when I began to see my story in my materials I began to build it.

It is a fact that I don't speak a lot about that my experience of agoraphobia was so severe that for 8 years I actually remained closed in one room in my house in which I kept the blinds down, every day. I didn't answer the front door. I rarely answered the phone. I never went out, ever.

When I started to purchase materials for my cages and they began to be delivered, those deliveries in my letterbox gave me my first opportunity in eight years to walk beyond my front door, to my letterbox.

And with practice I grew from a person who experienced gut wrenching anxiety and crippling fear about venturing out into the street and being seen into a person who was just checking their letterbox, just like you do. And somewhere in that process of change my experience of that daily event became less about me overcoming my fear and anxiety and more about the joy of anticipating what possibilities were waiting in that letterbox.

This was a great lesson for me and a shift in how i experienced the world. My world became open and filled with possibility instead of shut in and restricted.

He sat with me silently watching and sharing this experience with me. He is not much of a talker himself. A quiet kind of guy. So sitting in silence was comfortable for him. But occasionally he would bring me into the present of the world that we share outside of the cages with questions or comments about what I was doing. Bringing it into a spoken language. It was safe for me to convey that information and safe for him to receive it. I trusted him. And he held it.

One year turned into two as we sat and built and my language evolved from silent disconnection to words and sentences and paragraphs and stories that became big and bold and fleshed out in their telling between the both of us. The space was no longer being held as much as it was gathering momentum and taking on its own life and we were just driving it.

People who were coming to the house started to become interested and conversations about them began. I was connecting in a meaningful way, in a satisfying way, authentically conveying my truths. I enjoyed the sense of safety I felt in speaking my truth and with encouragement and connection my story became verbal.

The inclusion of my project in The Dax exhibition has given me such a beautiful space with incredible respect and support to begin to hear my voice tell my story. And it has become my story. I am no longer sitting with it or in it or being silenced by it. It is proudly displayed in a space that supports stories just like mine.

My experience of trauma and the expression of that experience feels like it has shifted from something I lived inside to something I can now claim as having lived, as having conveyed through my art, as having been received by an understanding audience and as having given me a forum to look at it from a viewer’s eyes and share that connection with everyone else who saw it.

I've changed from a person who felt isolated and defined by an experience of feeling unreachable into a person with an ability to convey my story, connect with many people, advocate for change in our mental health system, create awareness around stigma and prejudice and step out of my history into a space where I feel comfortable in telling my story and into an exciting possibility of creating new stories for myself.

I have included in this story of my cages an image that I made some years ago after my escape from an abusive relationship in which I was physically assaulted frequently by my partner. In the image I am crying out in fear and shock and in distress as his hand closes its grip around my neck and squeezes in his rage. Underneath the image it says "Sometimes it's hard to speak". 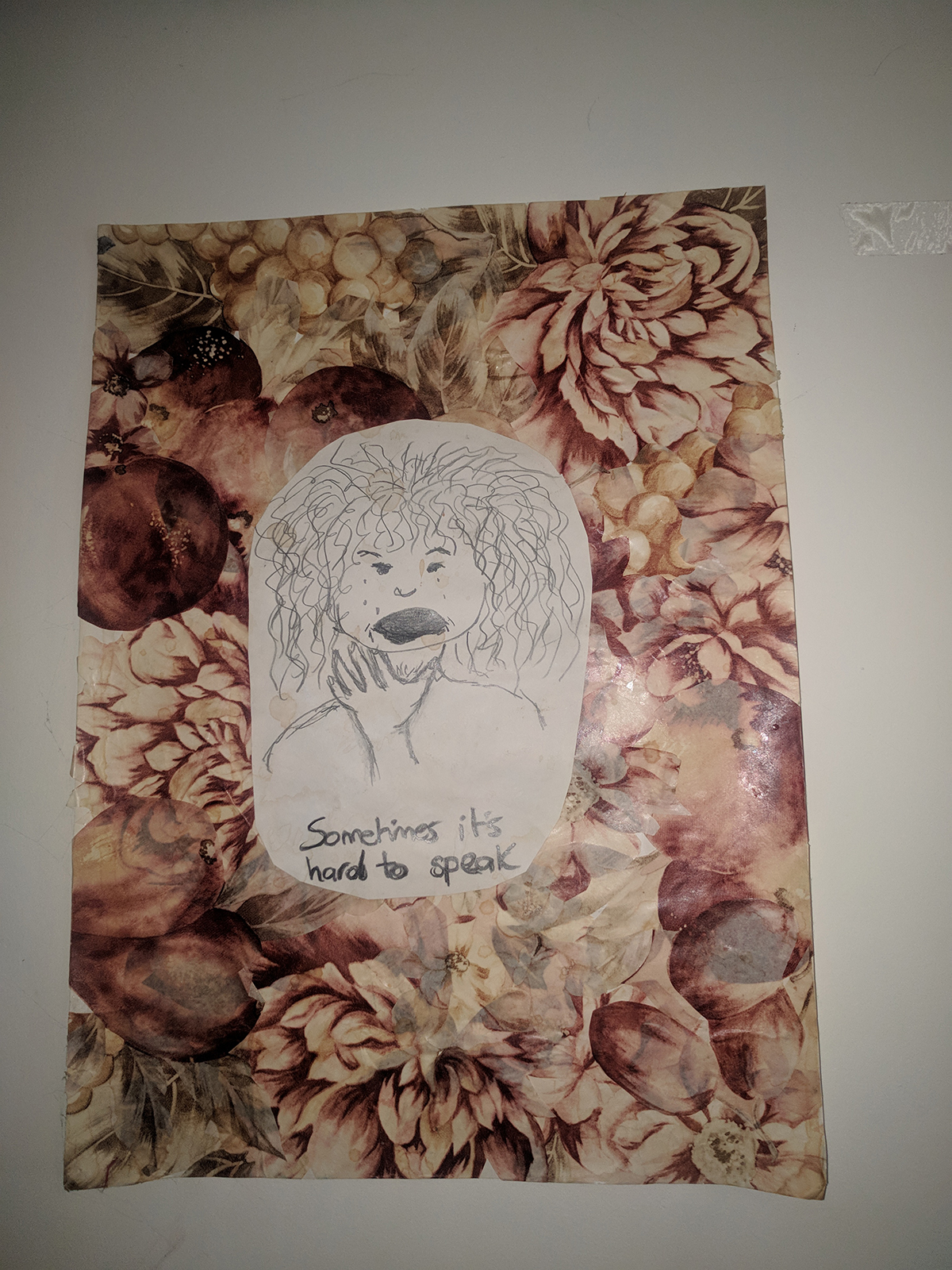 For me this image represents the source of my silence in its most literal sense. Silenced by violence, silenced by fear, silenced by threat, silence so often for so long that it becomes too hard to speak.

Share
Facebook Twitter LinkedIn
Tags:
dax centre art PTSD
Poem: What was the best thing someone said or did ...
The dangers of speculation in the reporting of sui...