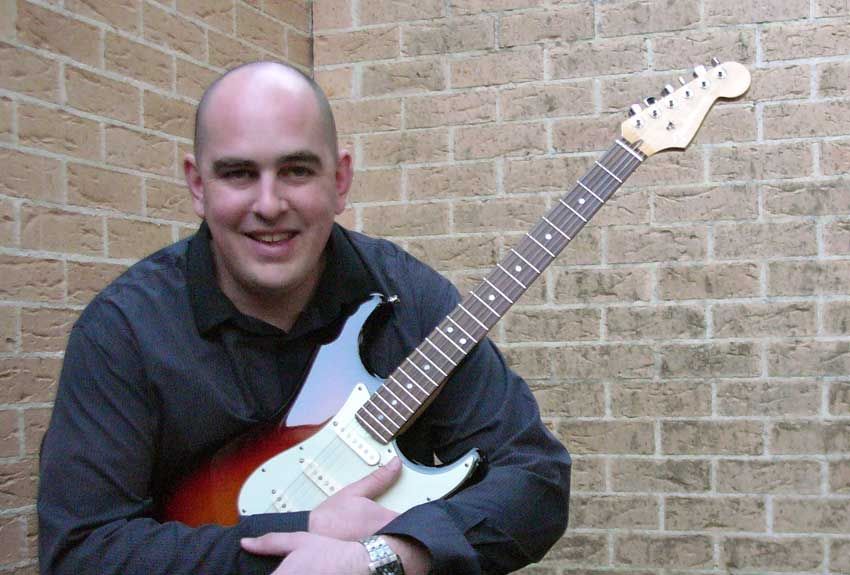 James has a mission. At the age of 36, he found something that gave real purpose to his life – to educate young people about the dangers of drugs which can trigger mental illness.

Tentatively he sat down and began to write:

When I opened my eyes it was morning, but not your average start to the day. The distinctive voices of four friends I had not seen for months were talking to me inside my head.

He had taken himself back to the day he was admitted to Rozelle Hospital in Sydney when he was just 18.

Putting into words the experience of his drug-taking, mental illness and the long journey to reconstruct his life took James two years.

‘I found it very cathartic,’ he says. ‘I wouldn’t be able to remember it all now because I dealt with it by writing the book.’

He describes the process as healing not only for himself, but also for his mother, Victoria, with whom he lives in Sydney. She read everything he wrote each day. ‘It was horrendous,’ she recalls with a shudder. ‘It brought everything back.’

James relates his story with raw honesty and great courage. He started taking drugs when he was 15 because everyone he knew was doing the same.

‘I never thought about the damage,’ he says. ‘I didn’t know what Schizophrenia was before someone told me I had it. I went to one rave party called Psychosis 4 and I didn’t even know what Psychosis meant. Then all of a sudden I just messed my whole brain up.’

He wrote the book –  Escaping to Reality – ‘to stop people from ending up like me. I can’t even hold a part-time job at the moment.’

Since that day when he was first admitted to Rozelle, James has been hospitalised four times. Victoria has been there for him every day.

His mother had no idea James was taking drugs.

‘It has been a huge learning curve for me,’ she admits. ‘At the beginning when James became ill, I didn’t know what to do with him. We took him to Rozelle and the doctors were great, but watching him go into the locked ward was like a scene from One Flew Over the Cuckoo’s Nest.'

When James came home from hospital he would lie for hours on the settee in what Victoria describes as ‘his great big old coat’. She felt helpless and isolated.

'He had done so well at school.' she says, 'I was tempted to say to people that that is what James is really like – that this James is not him. Apparently mothers do this.'

Although she says she is over it now, Victoria’s anguish is still palpable.

At the start of James' illness, during the months before he was settled on the most helpful medication, he was, says Victoria, in a terrible state. At one point Victoria took him back to hospital, where doctors tried him on a new medication.

‘I hung around for hours,’ says Victoria. ‘Eventually they said I could go and see him. He was asleep so I shook his shoulder gently. He looked up at me and said, "Hello Mum." It was marvellous! He was back – just like that.’

Once his medication was working well, James started a traineeship in Star City Casino. He was sharing a house with friends and enjoying his work but unfortunately slipped back into the party scene.

He stopped taking his medication, started using ecstasy and wildly overspent on his credit card. He was soon unwell and back in hospital.

‘Once I got out of that place,’ he says, ‘there was no way I would ever touch drugs ever, ever again. I just didn’t want to destroy my whole life completely.’

James now lives quietly, taking each day as it come. He sees his psychiatrist once a month, takes his medication, and gets on with his life.

He enjoys a game of pool, rides his mountain bike in the bush, and practices on his beloved electric guitar. He would like to play in a cover band one day.

‘That’s not taking me back into a drug environment,’ he hastens to add. ‘I would be a damn fool to give up everything I’ve worked for.’

James still gets 'the horrors' every now and then – the voice in his head, severe paranoia and attacks of extreme anxiety. When that happens he takes sanctuary in his mother’s lounge.

James is careful to avoid what he calls bad stress. ‘Caffeine will do it,’ he says. ‘Alcohol, or even being in a crowd.’

Writing and publishing his book has given direction to his life. He had an edition printed privately and is keen to bring it to the attention of Year 10 students in schools.

He is particularly thrilled by a message he received from a friend of his father’s, whose son had read a copy of Escaping to Reality.

He sent James an email saying his son had stopped taking marijuana, stopped smoking cigarettes and turned his life around at school.

‘Your words have made a difference,’ he told James. ‘You helped my boy and I thank you.’

‘If I had had this book at 16 or 17, things would have been very different for me too,’ he says quietly.